ULEZ – What Does It Mean For Your Industry?

Home/Blog/ULEZ – What Does It Mean For Your Industry?
­
Previous Next

ULEZ – What Does It Mean For Your Industry? 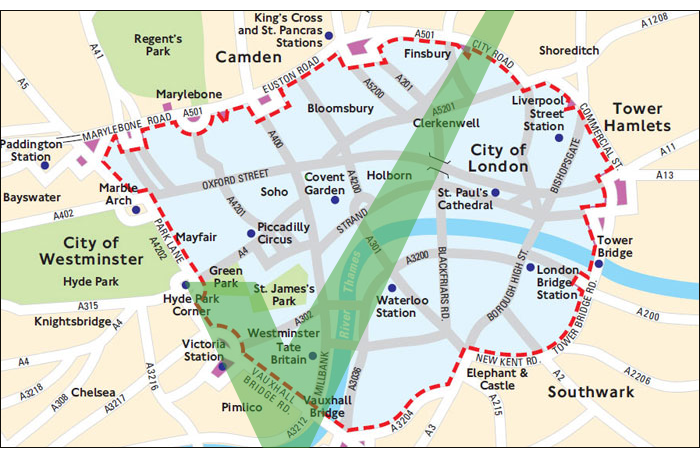 An Ultra Low Emission Zone (ULEZ) will be in place in central London from 8 April 2019, the aim is to help improve air quality. Most vehicles including cars and vans will need to meet new, tighter exhaust emission standards (ULEZ standards) or pay a daily charge to travel within the area of the ULEZ. This area is to be further extended from October 2021 to include the North and South Circular.

What Does It Mean To You?

The ULEZ daily charge will be payable from 8th April 2019. It will be:

£12.50 for most vehicle types, including cars, motorcycles, and vans (under 3.5 tonnes)

£100 for heavier vehicles, including lorries (over 3.5 tonnes) and bus/coaches (over 5 tonnes)

This will be in addition to the weekday congestion charge and the Low Emission Zone (LEZ) charge already in place but will replace the T-Charge.

As with the LEZ (but not the Congestion Charge), the ULEZ will operate 24 hours a day, 365 days a year. Vehicles, which access the zone and do not meet the required standard and fail to pay the daily charge will be issued with a Penalty Charge Notice (PCN) which will be sent to the registered keeper.

“So I am pleased to confirm that from 8th April 2019 – 17 months earlier than planned – stricter standards for diesel vehicles will apply 24/7 across central London. This builds on the success of the T-Charge and is part of my comprehensive plan to clean London’s air.”

“I’ve taken the bold action we need to protect our children, but we now urgently need the Government to step up and provide the support to Londoners and businesses required to help them meet these crucial standards.”

It’s hoped that the ULEZ will reduce the number of polluting vehicles entering the center of London and beyond by charging vehicles that do not meet the new emissions standards. However, the implications for businesses are expensive and it is wise to give this consideration ahead of the new ULEZ regulations in April 2019.

How can you determine if your vehicle meets the required standard?

Your Euro emissions standard may be listed on your V5C vehicle registration certificate, under section D. Otherwise, you may need to contact your vehicle manufacturer to check.

Euro 6 became mandatory for all new heavy-duty engines for goods vehicles and buses from January 2014, September 2015 for cars and light vans, and September 2016 for larger vans up to 3.5 tonnes.
A vehicle checker facility is available on the Transport for London website www.tfl.gov.uk

The ULEZ charges across London will cover all vehicles that fail to meet certain emissions standards and be policed by London’s network of Automatic Number Plate Recognition (ANPR) cameras.

Other major cities in the UK are also running consultations on their own planned future charges. So far the following Cities are considered the most polluted and will be ‘Clean Air Zones’ by 2020: 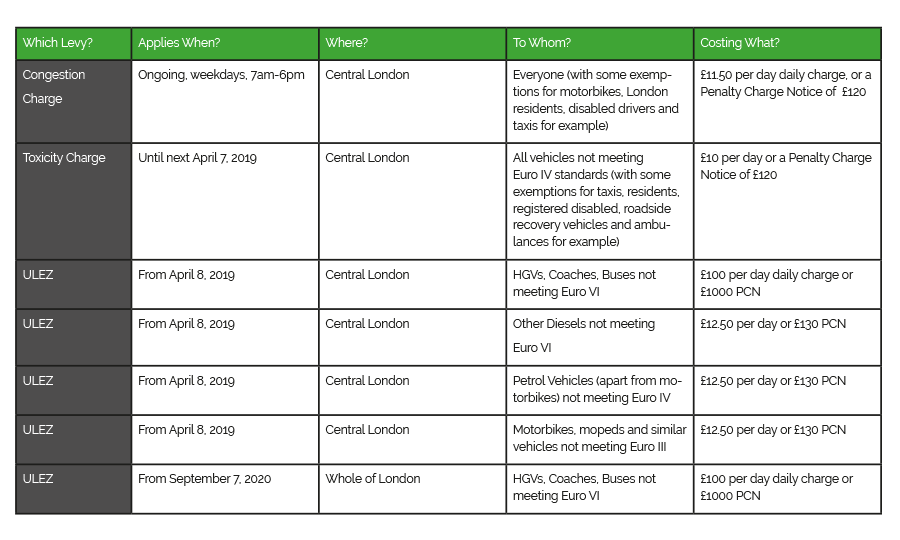 It’s not just cars and vans that will be subject to extra charges in London:
Motorcycles, moped, motorised tricycles, quadricycles..

• Pay the Charge as per table
• Consider replacing all of your vehicle/s
• Replace a proportion of your fleet, reassigning older vehicle to routes outside of the ULEZ zone
• Consider fitting a retrofit system which will make the vehicle’s exhaust and emission compliant.
• Plan your procurement to gradually replace your existing fleet.

How Can We Help?

Creative Funding Solutions have put together the basic facts about the zoning levies currently affecting drivers in London, and the planned forthcoming changes, which may impact on your procurement decisions.

The Freight Transport Association has recommended that its members refresh their fleets before the forthcoming changes take effect.