BOE Rate Increase on the Horizon? – How the Monetary System Works

Home/Blog/BOE Rate Increase on the Horizon? – How the Monetary System Works
­
Previous Next

BOE Rate Increase on the Horizon? – How the Monetary System Works 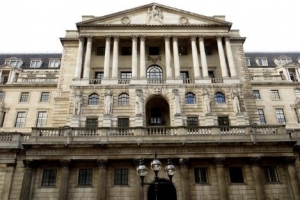 At the last meeting of the Board of Governors, the Bank of England voted 5-3 in favour of keeping rates at the same level. The 3 dissenters all wanted a rate increase, so that the BOE has some firepower when it comes to the next recession (which gets closer every day). The BOE is entrusted with the levers of our monetary system, and is outwardly independent of Government. But what is the monetary system, how does it work, and how does it affect you?

The monetary system is essentially the banking system, which exists to create currency (and profit) out of the labour of the people. Most people don’t understand how this works, as it is deliberately complex; if people did understand they’d have no part of it. Let me explain how it works.

First of all, although the BOE is independent of Government it really exists so that politicians can get elected on the back of promises that need financing to fulfil. Every party, even the Tories, promise to spend more than the country earns, which is called deficit spending. So how is the gap between earnings and spending bridged?

Basically, the Treasury borrows currency by issuing a bond – an IOU. The IOU promises to repay over the term of the bond the full principal plus an amount of interest. These IOUs are repaid out of future taxpayers funds. We call it the national debt.

So who is buying this debt? By and large, it’s the major banks, who compete in auctions to purchase this debt. They then immediately sell some of this debt to the BOE at a profit. The BOE buys this debt with ‘cheques’ drawn against an account which has a zero balance. They aren’t cheques – they’re strokes of a keypad, but you get my point. There is no actual money in existence to purchase this debt until the moment of its purchase, when it is created by the act of the purchase itself!

Theoretically the bank’s promises are backed by the gold held in its vaults, but the reality is that there is exponentially far more promised to pay than gold available to back it. The promise to pay the bearer in gold is notional only – and if you don’t believe me, try taking your £20 note to the BOE and demanding your gold. Let me know how you get on!

So when the BOE buys this debt it is creating money out of thin air. And what do you think the banks do with this new money? Why, they buy more bonds with it at the next Treasury auction! It’s like some giant Ponzi scheme. To recap:

The BOE doesn’t have the gold to back up your £20 note – but it has plenty of national debt. In reality then, your £20 is an IOU backed by another IOU. It’s as simple as that.

What happens to all that currency building up at the Treasury?  The politicians spend it on public works, government programmes, and of course, war. The doctors, firefighters, nurses, civil servants and soldiers get paid – but their deposits are held in the bank. That is, the bank holds on to say, 10% of them; it lends out the rest – and this is perfectly legal. When you are depositing your paycheck in the bank, you are really giving the bank money at zero per cent interest (or near zero) to lend out (or gamble in the stock market) at a much higher rate of return (of which you will see none). Saving, it turns out, in this system, is a mug’s game. And what does the borrower do with that £90? Why he buys something with it, of course, and the seller then deposits that money into his account, and the bank can loan it out in the same way as before.

Fractional reserve banking in this way also creates money, since all the money that is deposited at the bank can simply be used as the 10% (say) that the bank is legally required to hold onto, whereas it can commit to another 9 times as much in liabilities against that sum! In effect, when the bank writes a cheque, 90% of that cheque has just been produced from thin air! (Again, it’s electronic numbers, not actually a paper cheque). So you can see how the money supply gets expanded by the banking system itself. And that expansion is supposed to be the root cause of inflation.

How does this affect you? Well, you’re working for this money which is conjured up out of thin air. You are trading away your time and energies for something which really had no intrinsic value to begin with. The only value it truly has is that you are quite prepared to do that. And of course you are taxed on your earnings!

Our monetary system is based on debt. It is not based on saving. There is no future for savers, because the system cannot allow there to be. They will be inflated out of existence as inefficient pockets in a debt-based system. Inflation is on the increase in the UK. Governor Carney has started talking of raising rates.

Do you think it might be time to take out that fixed rate loan?

UPDATE; following recent data the BoE will probably not hike rates until later this year or next. However if the data changes again they have shown that they may well hike, and they are known for hiking aggressively during policy tightening cycles. The Fed is tightening, the Bank of Canada has followed suit, the ECB hints at tightening later this year – at some point the BoE will follow suit. The description of the monetary system above remains valid weather the BoE raises rates soon or not.